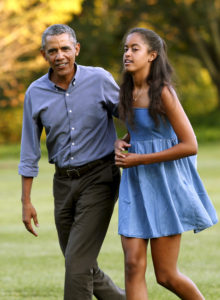 She’s made it through the constant observation that began with her entrance to the White House in 5th grade. Both Malia and her 8th grade sister, Sasha, have gracefully stayed the course without acting out and remaining close to their parents. Malia, an excellent student and tennis player, applied to a number of top schools during her senior year at Sidwell Friends School. The end result is that the 17-year-old has accepted Harvard’s offer, but will delay entrance for a year.

Could this start a gap year trend in the U.S.?

While traveling, I’ve always been intrigued by the New Zealand and Australian teens with heavy backpacks on their “walkabouts.” The idea is to have some fun, work jobs around the world and widen horizons before settling down to studies and continued life in the home country. A lot of Europeans do this as well, some using the time to work as au pairs in different countries.

Malia and Sasha have seen more of the world than most of us during their years as daughters of the President. Exposure to other people and places was a value their parents insisted on sharing. The first family’s travels have included India and Argentina, Russia, China, Britain, Italy, South Africa and Botswana. Malia already had her walkabout. 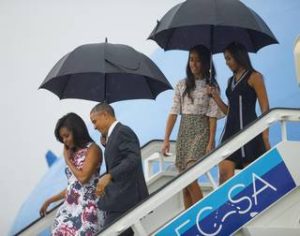 We don’t really know the reason for Malia’s gap decision, but I think it’s great. And since she’s already gone so far, my fervent wish for Malia is that she takes time in her gap year to dig in close with her family.

After all, Dad’s leaving his job, and Mom will not be pressed with leading campaigns for health and veteran families. President Obama has always valued family first and committed most of his evenings to his children, rather than adult socializing in D.C. But hanging out with your kids in a fishbowl won’t be nearly as relaxed as this forthcoming year.

Firstly, the Obamas must either rent or buy a new house in the DC area. Malia can be part of this search—and since she’ll be around, she can decorate her room the way she wants!

The former First Daughter will also has the chance to apply for a part-time job or an internship, perhaps in the world of film and television that she’s already explored through internships on “Girls” and “Extant.” But I treasure the idea of a teenager occasionally sleeping late, reading for pleasure rather than for tests, helping with groceries and gardening, and playing games.

The Secret Service taught Malia to drive—but now she can learn to trust her own instincts driving everywhere she needs to go. Malia and her family will likely have a lot of time to talk or listen to music when stuck in Beltway traffic on the way to Sasha’s school events. Best of all—Malia will be able to drive Sasha to school! 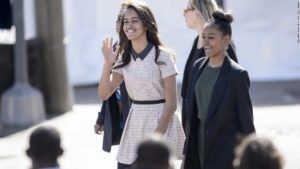 The President said in interviews that Sasha Obama would be the one to decide where the family stayed following his departure from the White House. He—a child who was uprooted and moved many times in life–understood how important feeling comfortable in school was. He didn’t want her to have start over again, as the girls had when they left their lifelong home on Chicago in 2009.

No upbringing is perfect, whether in the White House, or an ordinary suburban cottage. We can’t predict whether our kids will become happily paired or live solo, be financially successful, community-minded, or emotionally stable.But we can do a lot to make our own family systems work—and that’s exactly what the Obamas have managed. 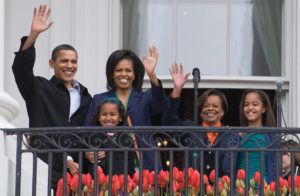