Two years ago, my neighbor bought a package of honeybees online as well as a beehive. The bees arrived healthy and active. But shortly after spring started, the bees vanished. Jeff said he didn’t see any evidence of dead bees nearby. It was as if the whole colony had taken off. 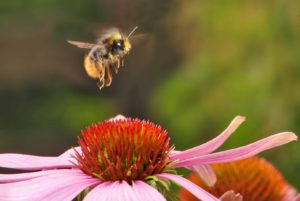 It was a sad mystery for all of us. It wasn’t until recently that I started regularly reading about insects and gardens. I’ve learned such honeybee evacuations are a worldwide problem that has a name that sounds like a psychiatric diagnosis: Colony Collapse Disorder.

In Maryland last year, the loss of bee colonies was 61 percent. This is  among the highest rates of bee loss in the US. Huge honeybee losses are also being counted throughout Europe and in South America and Asia. In China, so few bees are left in the massive agricultural belt that people are forced to hand-pollinate to have any apple crops.

Many scientific studies have determined that CCD is largely driven by pesticide ingredients called neonicotinoids (aka neonics) introduced in the 1990s. Neonics go by names like imidacloprid, acetamiprid, clothianidin, and dinotefuran. Ironically, these pesticides are meant to kill borers, Japanese beetles, termites and other insects that damage shrubs and trees. Not honeybees. But honeybees make it their business to dine on flowering trees and shrubs. They won’t fall down dead tasting a poisoned plant–but they lose the memory of where they need to go. And because they don’t know the way back to the hive, they perish. I read more about this in some recent articles in The Washington Post and Mother Jones.

Ortho and Scott are two huge pesticide companies that have pledged to phase out neonics in their product lines. A recent search of Amazon’s garden category showed Bayer, Bonide, Dominion and other manufacturers have plenty of neonic pesticides for sale.

Apparently, it’s not just the sprays that are risky. Nursery plants grown from a seed or seedling treated with neonics also run the risk of poisoning bees. Even trace amount of neonics have contributed to Colony Collapse Disorder. You could make yourself crazy wondering whether any flowering plant you’re considering is a Typhoid Mary.

Last summer, I decided to start work on our largely ignored garden. The house is in an 1890s city neighborhood where very few people use pesticides and fertilizers. Our neighborhood is a haven for birds, foxes, rabbits, raccoons, bats and other delightful wildlife. Of course, I wanted to do no harm. A 25-year-old memory of how I accidentally killed most of my Japanese garden’s camellia trees by spraying Round-Up on dandelions still haunts me.

I contacted Maryland’s Chesapeake Bay-Wise gardening program, a free teaching service aimed at reducing pollution flowing from the state into the Chesapeake Bay. After an email exchange, two friendly master gardener volunteers. Lynn and Debbie, walked me through my struggling garden. They checked off which practices were environmentally sound, and gave advice on where I needed improvement.

I was very surprised that years of benign neglect put my garden in the Bay-Wise certified category. The fact that grass clippings were left on the lawn after cutting, and water easily reaches the earth through the gaps between bricks in the path. The house gutters have long downspouts that allow rainwater to flow into the earth; all I need are rain barrels to perfect my water conversation. The master gardeners looked at all my weeds but did not criticize. However, they told me I’d better start pulling wild mustard that day.  Debbie and Lynn were concerned about invasive non-native plants, like English ivy, and had chemically free strategies for elimination. There were a few bees buzzing around, and the local trumpet honeysuckle vine was pointed out as a great nectar source for them and hummingbirds.

My biggest takeaway was that if every plant I added was a native one, I could become a farmer’s market for the butterfly, bee, insect and bird populations. I also got the sense I didn’t have to make my property look like a forest to go native.

Ever since I saw charming cottage gardens filled with wildflowers and perennials in England and Australia, I’d secretly wanted one. No grass to mow—just flowers, shrubs and herbs waving in the wind.  I realized that if I were to remove the grass right in front of my house, I could fill the leftover space with many perennial plants and grasses that would be more than eye candy.

The grass came out yesterday. Despite a looming book deadline, I’m working on installing two brand-new gardens: one in front of the house, and the other along the driveway, where English ivy once held a ruthless grasp.

The landscape doesn’t look like much now, but I am hopeful that the organically-grown native plants will be rooted and spreading by summer’s end. Just as I hope that the new Pollinator Protection Act banning commercial sales of neonic pesticides will be signed by our governor tomorrow, making Maryland the first of the United States to get serious about saving bees.