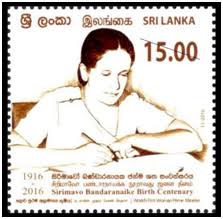 I’m posting on the eve of the day that Democratic House Majority Leader Nancy Pelosi has called for an impeachment inquiry. The Democrats’ concern—which is shared by me and many Americans—is whether the Republican president, Donald Trump, coerced a foreign government to investigate his own political rival. I have been waiting for the other shoe to drop on this guy since before he was elected, and there’s nothing I can do to affect the outcome of this political process. I don’t even know that the House will vote for impeachment and that the Republican-controlled Senate will agree that Trump violated the Constitution. But I keep thinking, why can’t a reasonable woman serve as our next president?

Americans have never had a woman president, or even vice-president, although sixty other countries have had a female premier.

When I did some research on female leadership, I was not surprised that the first female national leader was from South Asia. However, I made a big mistake about her identity. In my mind, I always had it that the world’s first female premier was Indira Gandhi, who won election for prime minister in India in 1966.

Actually, the honor goes to Sirimavo Bandaranaike of Ceylon (now Sri Lanka) in 1960. And hearing her name, I began wanting to know more about her. 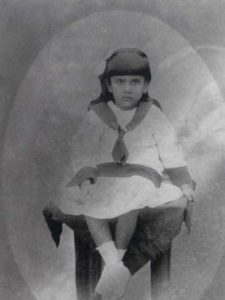 Sirima Ratwatte was born in 1916 in Ceylon’s highlands, near the town of Kandy. The day Sirima was born, a herd of elephants reportedly invaded an enclosure on her family’s estate. This was said to be an auspicious sign. Her wealthy Sinhalese parents also had an astrologer come to analyze time of birth and location data. Based on all of his calculations, the astrologer found Sirima’s destiny was to be a queen. (Probably a sign of the times. A modern-day astrologer predicted my daughter would probably be a doctor!)

The idea of Baby Sirima becoming a queen seemed impossible, with King George V in power over Ceylon and the rest of the empire. However, Sirima had noble Sinhalese blood on both sides of her family, and her father, Barnes Ratwatte Dissawe, was a senator in the British-controlled colony.

Sirima was the eldest of the family’s six children. She attended a variety of small schools including a Roman Catholic convent school in Colombo, but her parents did not send their future queen for higher education. Therefore, after finishing high school, she devoted herself to volunteer work throughout the island, encouraging agricultural development and women’s health and education in rural areas. All the while, Sirima lived with her parents on their beautiful estate, while they fretted over finding the right husband for their socially committed daughter.

After several disappointing candidates, a matchmaker approached them suggesting a promising lawyer who was a junior administrator in the State Council of Ceylon. Solomon West Ridgeway Dias Bandaranaike (say that fast three times), had graduated from Oxford and came from a low country Sinhalese family who’d become rich during generations of administrative service to Ceylon’s colonial rulers. The Ratwattes considered this background beneath them; but an astrologer insisted the young people’s horoscopes matched in a particularly powerful pattern. The marriage was a go.

Solomon, 41, and Sirima, 24, had one of Ceylon’s grandest Raj-era weddings in 1940. As Solomon (better known as SWRD) rose in government, Sirima gave birth to three children and continued social work relating to agriculture, women’s health and education, eventually becoming president of the Mahila Samiti women’s organization.

As India gained independence, it became apparent Ceylon could achieve self-rule. SWRD Bandaranaike joined the nationalist movement and ran for house of representatives. Later he became minister of health. Behind the scenes, Sirima encouraged him to join Ceylon’s nationalist movement and run for the house of representatives. He did that and won; Sirima, with her finger on the national pulse, persuaded him to resign from the dominant party and establish a new one that would attract rural people who had been ignored. She campaigned for SWRD with the new Sri Lanka Freedom Party, and he eventually was elected to parliament and became prime minister of Ceylon in 1956.

SWRD leaned toward socialism as a way to assist the poor, and he wanted non-English speaking people to feel strong in the country that was no longer under British rule. One of the most polarizing suggestions from SWRD’s party was to make Sinhalese the national language, because there was also a significant Tamil minority with a different language and religion. He also wanted to take businesses controlled by wealthy individuals who were often Christian into government hands. SWRD became embattled on many fronts and was assassinated in 1959 by a Buddhist monk who was angry over the government’s seeming dismissal of traditional medicine.

After her husband’s death, Sirima’s life was upended. With almost 20 years of marriage behind her and mature children, what would her role in life be? She had campaigned for the Sri Lanka Freedom Party before—and now its members implored her to hit the campaign trail to speak about her husband’s death and unfinished business. They voted her in as leader of their party, which held a minority number of seats in government. The SLFP theorized that the pleas of a grieving widow could move more people to vote for the party.

As Sirima campaigned, she appeared always in a widow’s white sari. Instead of lecturing about abstract ideas, she spoke frankly about the death of her husband and cried openly, which often moved her audience to cry as well. Simira’s opponents called her the Weeping Widow and arranged to have a random widow from their own party run for prime minister in order to beat her.

Largely because of the rural Sinhalese voters’ support, the SLFP had a huge victory in the 1960 election, and Sirima was sworn in as prime minister, as well as minister of defense and external affairs. This was a lot to ponder  for a woman who had no education in economic, military and international affairs. Her late husband had come to government with the benefit of a law degree and an Oxford education. She had high school, and her years of volunteer experience.

Ceylon’s population was ready for her, though. They no longer referred to her as Sirima; she was now named Sirimavo, a term of greater respect.

Prime Minister Sirimavo’s first steps were to follow her late husband’s agenda toward strengthening the power of Buddhist Sinhalese and nationalizing many areas that had been privately held in the past. Banking, foreign trade, petroleum and insurance were taken over by her government in the hopes of spurring business development among non-elite citizens. She made the bold move of cutting off state aid to Catholic schools and replaced the national language, English, with Sinhalese.

Most of Sirimavo’s actions were welcomed by the Sinhalese Buddhist majority, but discontent was rising among Christians and Tamil Hindus. The situation in Ceylon reminds me of what happens with any leader who appears to cater to a particular religious or ethnic group in a country that is diverse.

Sirimavo was re-elected to a second term in the 1970s, during which time Ceylon transformed into the Republic of Sri Lanka. Yet concerns about Sirimavo abusing power led to being banned from political life from 1980 to 1986. After the ban was lifted, Sirimavo ran for the office of president in 1988, losing narrowly. By this time, two of her children were in politics. Her son Anura defected to his father’s original party, the United National Party, and her daughter Chandrika Bandaranaike Kumaratunga was elected Sri Lanka’s president. Chandrika duly appointed her mother to a third term as prime minister, which had become a largely honorary position. Sirimavo served from late 1994 until 2000, when she resigned at the age of 84 due to failing health—or perhaps the party’s wish for a younger, more hardline politician to campaign in upcoming primary elections.

Sirimavo Bandaranaike was a civilian in a wheelchair when she went to vote in the polls in October 2000, the same day as her 60thwedding anniversary. Within hours of casting her ballot, her heart gave out, and she passed away. Shops and schools were closed for national days of mourning, and oil lamps were lit in homes, and white flags fluttered in remembrance.

As I think about Sirimavo’s ascent, I realize that she succeeded with much less preparation and government experience than the women senators running for U.S. president today. I think the volunteer work she’d done with the poor over many years made it possible for her to talk simply and powerfully to her constituents. She enchanted people who had never voted before and led them to the ballot box. Her people followed her from victory to scandal and back without flinching.

Sirimavo Bandaranaike’s strength was her ability to win hearts and minds of those who lived far from the city and thought nobody knew about them. As I look toward the presidential primaries beginning in February 2020, I hope an American woman leader can do the same.