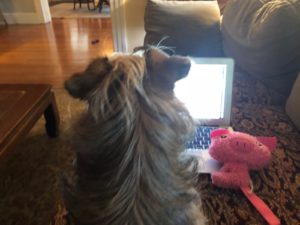 My comments this week will be my briefest yet. I am on deadline with Book 2 in my Perveen Mistry series. A writer is always working on a book, but there are many times in the early days of a novel that it must be handed back and forth between the author and the publisher. And this process turns the work from private to teamwork, and can create stress.

The first time this particular tale met a deadline was back in February, when I handed in an 80,000-word book about 4 weeks later than planned. My editor wrestled with it and returned it to me in March, at which point I began the big improvement campaign. Most writers don’t spend months on a rewrite, like I do. Typically, novelists rewrite in a month or less. But I have learned I’m not the kind of writer who just swaps in a few words.  I delete sentences, create new paragraph after paragraph, and write many more pages. I do plenty of cutting as well. About ten weeks and 20,000 words since the handoff for Book 2, I am elated to be almost through, although I still have a supermarket’s worth of names and titles and typos to address. After I submit it, I expect to have to rewrite more bits (but not as much), and then there is the line by line evaluation of the copy-edit, followed by a couple of rounds with galleys. You could say rewriting and editing is a job in itself, but I should have started Book 3 back in February, when I was researching it in India.

Being close to a deadline—or knowing I’ve just missed it—changes my life. I exercise and cook less, I forgo social events, and worst of all, I SIT for hours. My back is often stiff and there’s a permanent dull pain in my unexercised hamstrings. The dogs are becoming too accustomed to having me home, staring at my laptop either at the dining room table, at my desk on the sleeping porch or my study, or on the living room couch. Daisy, pictured above, thinks nothing of walking across the keyboard to make the point that I should pay attention to something else (her).

Deadline is a concept I first met when I was a newspaper journalist. During those years I wrote articles that were conceptualized, researched and written by me and edited by someone else in the same eight-hour time span. The story would be printed in the next day’s paper. It seemed like plenty of pressure, but in hindsight, a 600-word story is not that hard to pull off. Getting the facts straight was the most important part of the journalism process, whereas fiction writing, it is not just facts but expository language, dialogue, and a sense of heart.

People sometimes ask what happens if a writer doesn’t meet a deadline. Will you lose the chance to have your book published? The answer typically is no. The book will still come out, but it’s likely it will shift to another month to allow time for editing, marketing and printing. If a book is late and the pub month can’t be adjusted,  it will be a major challenge for the book’s publicity arm to get clean galleys out to critics and the publisher’s sales force. That said, back in the 1990s I was with another publisher that suddenly axed a lot of writers with late books, actually demanding they repay their advances. Chief among them were authors who had signed contracts with due dates years earlier that were not met. It seems that turning books in late is a very common thing.

Deadlines are a necessity to keep books coming to the shelves. But serious editors and writers  agree that the quality of the book is the most important factor. A truly exceptional book coming in late is welcomed because it really is that good. However, a bad book arriving on the dot, driven there for fear of being late, hurts everyone involved its publication.

And the reader, too!