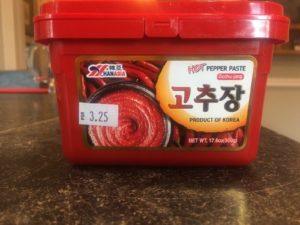 I’ve had a little too much Thai, Indian and Vietnamese restaurant food lately. Even good food can become boring. Looking for another Asian taste, I decided to go after the obvious: Korean food.

Fortunately, there are a lot of Korean immigrants around Baltimore. I’ve dined at places ranging from multi-starred restaurants in the suburbs to the casual Korean take-out counter at R House, the great new food hall in Baltimore’s Remington neighborhood. This has been a fun project.

I’ve noticed that in almost every dish, a special flavor tickled my tastebuds. That is the taste of gochujang. 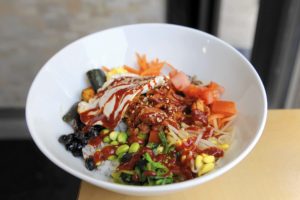 I first tasted gochujang in the delicious marinated grilled meat dish called bulgogi. It gives the robust red color and flavor to Korean stew dishes known as jigae and is also stirred up and served as a condiment.

The elevator pitch for gochujang is “a cross between miso paste and Asian chili sauce.” But this paste is not nosebud-clearing spiky-hot like Sriracha sauce, another favorite condiment of mine. Gochujang has a good, deep kind of hot and a complex, almost-meaty dimension foodies call umami. 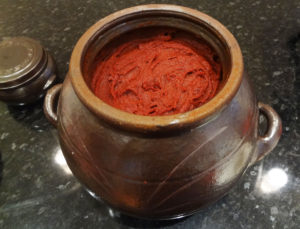 Watch a short video of how to make gorgeous gochujang at http://www.maangchi.com/recipe/gochujang

Gochujang has become buzzy in the West for the last five years, although it dates back to at least the sixteenth century in Korea. Someone clever took the mellow Korean chili known as gochu, dried it, and crushed it. This was mixed with powdered rice, powdered fermented dried soybeans, sprouted barley and salt. Fresh gochujang paste is stored in a ceramic crock outdoors for six months before eating. The fermentation creates the healthy lactobacillus to support healthy digestion; and the chili element within the food inhibits spoilage. Chilies contain capsicum, which some say helps fight obesity.  In any case, gochujang has some other great nutrients: Vitamin B2, Vitamin C, protein and carotene. It tastes like heaven, but it isn’t junk food.

Korean purists still make gochujang by hand, just as people in Japan still make tofu and miso. Fortunately, there are a few potters interested in making the proper jars, which must be screened at the top to allow ventilation. It’s almost like the composting I’m trying to do in an old trashcan in my yard.

I wanted to get a gochujang fix the easy way. That meant shopping. I found many tubs of it on the shelf of the Asian supermarket a few miles from my house. After the gochujang tub opened, it needs to go into the refrigerator. I put it there while I pondered what to do next. 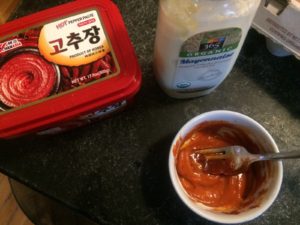 There were many choices. I can’t count the ways I’ve seen gochujang as an ingredient in non-Korean recipes, particularly as a drizzling sauce or mixed in with mayonnaise. One of the first things I did was make gochujang mayonnaise that was used for many purposes.

I also decided to put a spoonful of gochujang in the soy-stock mixture I use for vegetable stir-fry. A dish with Chinese origins was changed—and not for the worse! 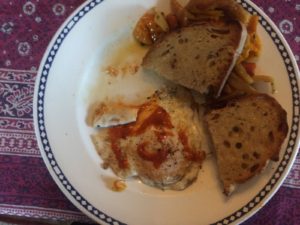 While I was taking baby spoonfuls out of my pepper paste tub, the food people have crafted grand new recipes.

British cooking author and TV host Nigella Lawson blended Italy and Korea in her original recipe for Korean Calamari and then she blended India and Korea in Korean Keema. 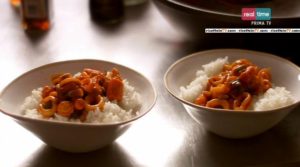 Turkey and gochujang are a popular combination. I like the ingredients in Blogger Lemon Lime Lisa’s gochujang turkey meatballs which would be a great party hors d’oeuvre.

Without realizing it, I used up my whole gochujang tub on silly little ideas. I wanted to do something big. One Saturday, I went shopping for a new container of gochujang and decided to lavish it on a small pork loin.

First, I browned the 3-lb. hunk of pork in a little oil. Then I added in 1/3 cup gochujang paste, 1/8 cup soy sauce, 1/8 cup of honey and ½ cup of chicken stock. I let the loin braise in the spicy potion for 8 hours, until cooked through and very soft. I took out the loin to rest and boiled down the remaining red-brown cooking liquid to make a velvety brown sauce. Okay, I apologize for the lack of photograph; when the pork was ready, I had no impulse control.

The pork loin was a bit too much for just my husband and me to eat. Still, it was excellent, from the first night, when it was presented like a roast with polenta on the side; to the next day’s lunch, when it went inside a tortilla wrap along with lettuce and radishes; to the grand finale two days later, soft tacos with fresh chopped vegetables.

By the end of my gochujang experiment, I wasn’t bored. I was filled by another of capsicum’s supposed benefits: euphoria.