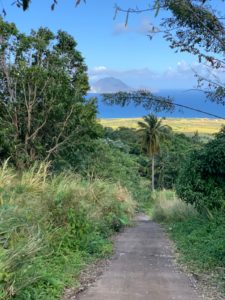 Confession. Last week, I did a scant amount of writing, and a lot of hillside climbing, on the Eastern Caribbean island of St. Christopher, better known as St. Kitts.

I had flown here with all good intentions. Freed of daily chores, including dog walking and driving and cooking, I suspected my mind would expand. To stay in a colonial style cottage in the rain-forest, to gaze through a screen of trees at sparkling blue water, would only enhance my motivation. It all made sense!

The problem with going to a place like St. Kitts is that the scenery is so spectacular it’s difficult for a visitor to notice anything else. I became mindful without being tied to any formal practices. I simply could not focus on much, except for my immediate environment: the sparkling sea and endless parade of clouds. Although it wasn’t all sunshine; sometimes it rained gently, or the water poured down like an Indian monsoon. 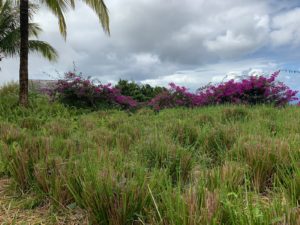 I’d dragged my husband along with me to Bellemont Farm, a working organic farm/luxury resort. The farm is investor and government-owned, meant to bring jobs and profits to the island. The eco-resort has 44 guest cottages and villas, and about as many more that are partially built. The development was  designed by Bangkok-based architect Bill Bensley in St. Kitts’ historic cottage style and built stone by stone by carpenters and stonemasons from the island.

Without a doubt, the raw landscape is Bellemont’s greatest asset. There are almost 500 acres of undeveloped hilly land that once belonged to sugar barons, but was unsuitable for sugarcane. These hills are close to the island’s dormant volcano, Mount Liamuiga; and volcanic soil is said to bring a special sweetness to the vegetables and fruit grown in its terroir.

It is hard not to slip into French here, even if you don’t speak it, because the French and English were continuously vying to dominate the island since the 1600s.  The island was originally inhabited by Carib Indians who were the victims of a. horrific genocide by the French and British settlers working together. Without anyone to undertake the hard labor of sugar farming, the colonists ordered slaves brought from Africa. After the British government outlawed slavery, British sugar plantation owners used indentured laborers from Asia. 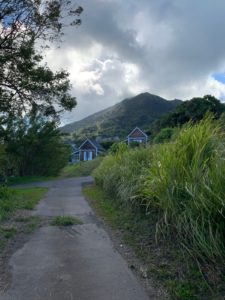 St. Kitts and neighboring island Nevis became an independent nation-state in 1983, and they still retain membership in the Commonwealth nations. St. Kitts’ last sugar plantation closed in 2005, quite late compared to other countries with sugar. The island has both a veterinary and medical school that attract North American students. There is a main tourist drag called Frigate Bay on the south end of the island close to the airport.

On a half day tour of the island, we saw plenty of simple houses in villages that we passed through on the main island road. This is not a prosperous island, and the government is encouraging people to invest in good building projects here, in exchange for a St. Kitts passport. I thought it was great that the original villages, some going back to the 1600s, have survived and are honored with signs one sees driving along the winding beach road.

For the smallest sovereign state in the Americas, sustainable luxury is a delicate issue. Bellemont’s shingled guest cottages are not a literal depiction of the homes that sugar workers lived in, but they do succeed in making someone like me feel pampered in a homier way than a chain hotel could. And the benefit to the community is clear. Many employees had worked in sugar before the mills closed and were proud to be creating a visionary project for St. Kitts. Our taxi tour guide, Zien, worked as a surveyor at Bellemont while it was being laid out. Zien explained that if there was a big tree on the property, it could not be cut down for the sake of a cottage. The cottage could be built near the tree or on another slope. Such ecological wisdom has kept this rainforest area  very attractive to animals and gives a feeling of age and longevity to the resort. 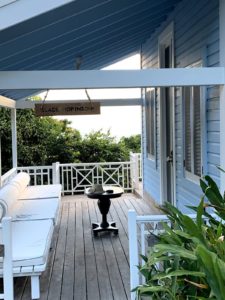 Another sign of island pride is that every cottage is named for a Caribbean writer. Cottage 204’s designated author was Slade Hopkinson, a poet from Guyana. The cottages and villas are scattered throughout the hilly terrain to give their temporary tenants breathtaking views and maximum privacy from human eyes. 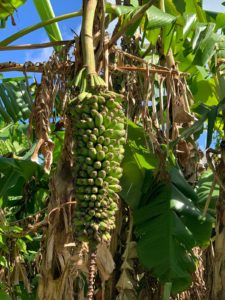 Many of the cedar-shingled cottages have their own private plunge pools. For some reason, ours did not—but like all of the cottages, it had three gorgeous verandas wrapping around. Because the resort is in the mountains, we experienced no mosquitos and happily spent many hours on the verandas—though the cottages themselves have subtle mosquito screening backing the shuttered windows and doors, just in case a whining bug might show up, perhaps in a different month.

The cottage’s rear veranda is open to the sky to allow a maximum sea view. I found this place extremely magical at sunrise, but too bright during the day to spend much time there. 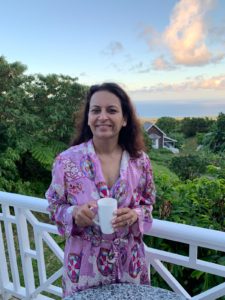 But no worries! When the sun rose, I hung out on a roofed veranda fitted with a long daybed that was perfect for writing. And the last veranda was on the cottage’s south side and was clearly for Tony and me only. This was a full-scale outdoor bathroom—with tub and sinks in the open, and toilet and shower that did have latching doors for privacy. We felt utterly private because that side of the cottage was shaded with many lush trees and bushes. 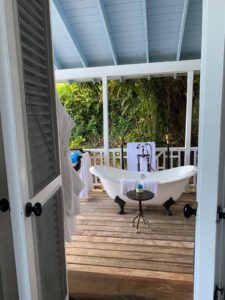 Well, we weren’t entirely alone. While in the outdoor bath, Tony was spied on by a curious monkey. Another time, he saw a baby monkey came off the banana tree to investigate the veranda, only to be loudly reprimanded by its mother. 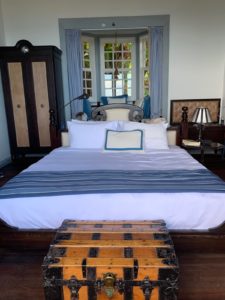 Inside, our high-ceilinged cottage was a muted fantasy of tasteful blue and white cotton fabrics and traditional island wooden furniture. We shut off the cottage’s air conditioning and were thrilled by the refreshing cool air coming through the shuttered doors and windows. It was a shock to leave Bellemont’s lofty perch for the long drive to the city’s capital, Basseterre, and realize that the island could actually be humid and hot. 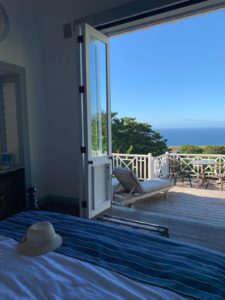 Some of the vast acreage is used as a sustainable organic farm, with hundreds of different fruits and vegetable. The Kitchen restaurant offered all-organic seasonal produce, meat and fish and meat cooked in a fusion of European, Caribbean and Asian styles. At breakfast, I had smoothies made from sour oranges, kale, cucumber and cantaloupe. Locally-caught mahi-mahi, lobster, tuna and snapper were on the menu, as well as free-range pork, beef, chicken, duck and rabbit. 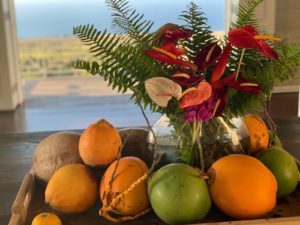 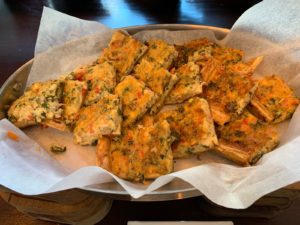 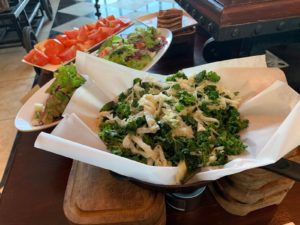 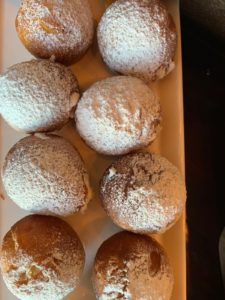 One misty evening close to our departure, we rode a golf cart through the twisty up and down trails to the heart of Bellemont Farm’s vegetable garden. About twelve of us gathered with the hotel’s executive managers for a special farm dinner. It was an astounding array of pickled vegetables and fruits, grilled meats and fish, freshly baked breads and fruit pies. 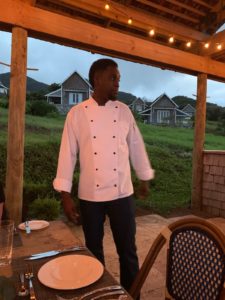 Conversation and wine flowed, and three hours passed without us realizing it. As my husband and I traveled up the hill for the fifth and final night of my stay, I thought about how far we had come from our everyday urban world… and how wonderful it was that respite could be social, as well as solitary. 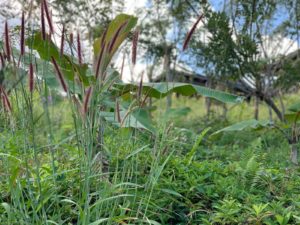