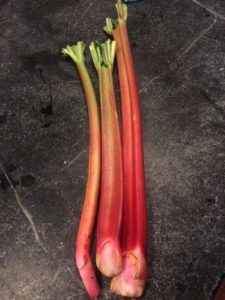 Pink rhubarb stalks fill the tables at farmers’ markets in early spring. With the stiff body shape of celery and the tender texture of a fruit, rhubarb is the barb of jokes—a misunderstood and under-appreciated bit of produce.

I speak as a rhubarb convert. The first time I saw the ragged green plant growing near the garages of my first two houses in two different states, I thought it was an inconvenient weed that needed to be dug out. Someone explained it was rhubarb, but I still wasn’t drawn to trying it. For starters, the rhubarb was on a dog-walking route. I’d seen canines appreciating it. I also recalled stories about part of the rhubarb plant being poisonous.

But the shunned rhubarb gnawed at me. Cafes and gourmet friends offered me delicious desserts where rhubarb was an ingredient, sometimes mixed in with strawberries or other sweet fruit.  I developed respect for the soft, tangy substance that was proving itself a valuable team player. I felt better knowing just the big green leaves of the plant are full of oxalic acid—the infamous poison. The stems are edible raw or cooked.

I bought my first bunch of rhubarb from the Wedge, a Minneapolis co-op grocery. Since rhubarb does very well in places with cold, wet winters, Minnesota turned out to be a prime spot to buy rhubarb. I made a cobbler that I thought was tasty, although nobody in the family clamored for it. Too sour, they said. In my mind, rhubarb’s tang is similar to that of lemon curd—but ever so much more succulent.

And rhubarb’s got more going on that the average fruit or vegetable. Both Chinese and Europeans discovered the stems aid with digestion, so it was used as culinary medicine. Rhubarb is rich in  calcium, and Vitamins C and A; however, its superstar ingredient is Vitamin K, which fosters brain health. A single serving of rhubarb provides 45% of suggested daily Vitamin K.

The stems themselves have a lot of power—they cause the blood to run thin. This means rhubarb is something that shouldn’t be eaten to excess by hemophiliacs or people on blood thinners. But you could make it a regular part of your diet if you’re bulking up on foods to potentially stave off dementia, need calcium to strengthen your bones, or are wishing to be more “regular.”

Rhubarb enthusiasts have their own heaven on earth. The Rhubarb Triangle is a nine-square mile area between three villages in West Yorkshire. For generations, Yorkshire farmers have treated rhubarb like royalty, raising it in barns lit by candles in order to avoid sunlight’s photosynthesis, that would color the leaves and stripe the stems green. This results in a deep red color of the stems, and supposedly sweeter flavor.

The thing about garden-variety rhubarb is one only has to add sugar to make it what you want. Apparently rural children sometimes eat raw rhubarb canes are dipped in sugar and eaten. I tried this, but it was too hard and sour for my taste. It brought me back to thinking about poison.

The mystery writer began pondering exactly how rhubarb could wreak havoc. She imagined an impatient woman in her fifties serving lunch to her eighty-year-old aunt, a wealthy woman who’s a health fanatic and has been living too long for everyone’s taste. The oxalic acid leaves were shredded and went into a salad with a sweet dressing. The evil lady’s idea was that the bitter taste would be misidentified as escarole or another bitter lettuce—greens that the elderly aunt approves of. However, you’d have to eat a LOT of rhubarb leaves to die, rather be sickened. My guess is the old lady would recover and write her niece out of the will.

One farmer’s market bundle of rhubarb can be transformed into one very sweet cobbler or pie. But you can find those recipes everywhere! I took that bundle and divided it to create two non-dessert rhubarb recipes. They’re so easy you can cook them at the same time and have a rhubarb compote with yogurt for breakfast, a cheese-and-rhubarb-apple chutney sandwich for lunch, and a scoop of that chutney with an Indian or Western dinner. If you really wanted to push it, you could put warm compote with ice cream or on cake for dessert.

Rhubarb-Apple Chutney is good with rice and other elements of an Indian meal, or on the side with grilled or roasted meats. It’s also nice on a sharp cheddar cheese sandwich. The chutney will keep in the refrigerator for about a week.

Rhubarb compote stays fresh keeps in the fridge for one week. It’s good with Greek yogurt or whipped cream; mixed into porridge; or spooned over pancakes or  sponge cake. One word to the wise is the two recipes look almost identical, once cooked. So label them—unless you like the taste of red onions mixed with ice cream.