I regret to interrupt my regularly scheduled post—which was going to be food-related, alas!—because my life keeps getting interrupted.

These days, my writing schedule seems divided between fiction and emails to senators, congressmen, and activist friends. And I’ve been on Facebook more in the last week than in the last six months.

My new, highly distracted life began with the election of Donald Trump and the day after, my participation in the Women’s March on Washington. It was a large march with more than 500,000 participants. I imagine this might have been the largest group gathering I’ll ever attend.

Statisticians specializing in crowd counts put the talley of marchers participating in 500 simultaneous marches throughout the US on Jan. 21 at between 3.3-4.6 million.  Marches around the globe added thousands. As if to answer us, the day after the Women’s March, President Trump defunded Planned Parenthood and made other sweeping actions against women, including closing down the federal office that assists domestic violence prevention organizations. He also halted US aid for women’s health clinics overseas, if the clinics had anything to do with abortion.

I knew we were getting close to the march when I saw from the bus window a lot of women wearing pink hats. One week before, word spread via Internet to wear “pink pussy hats.” Some women confided they had learned to knit just to make a hat for the occasion, following a simple pattern for a cap with pussy-cat ears, a reference to the president’s vulgar reference to female genitals. The problem with throwing around a nasty word is that it can come back in a way that makes your eyes hurt.

For me, the best thing about the Women’s March on Washington was the patience and kindness people showed to each other. It was a textbook example of peaceful protesting. I saw no pushing, lots of smiles and encouragement, and plenty of admiration for the witty signs and costumes. Women of all ages—from young children to grandmothers—came together for a shared purpose. The rally was multiracial and diverse, and included perhaps ten percent male participation. These men, who almost surely believed that “women’s issues are everyone’s issues” (thank you, California Senator Kamala Harris), were treated like equals.

The march’s map showed plans to proceed together on on one street toward the White House, but the crowd was so vast that it spilled onto the mall itself. There were plenty of police around, but they were non-threatening and in some cases, even jovial. They realized the impossibility of keeping marchers off the mall grounds. Can you believe a march of more than a half-million people without a single arrest? 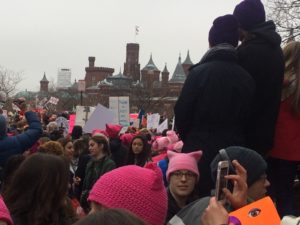 Riding the bus home from the protest, we sang songs including “We Shall Overcome.” I felt so much stronger and happier.

But—wouldn’t you know?—disturbing executive orders kept coming from the White House. The most shocking, at week’s end, was that that refugees and green card-holders born in seven predominantly Muslim countries were being denied entry into the U.S.  Because we have laws barring immigration discrimination on religion and national origin, I was stunned. Freedom of religious expression is precisely what drove pilgrims from England and Europe to set up a colony that later became a nation.

On Saturday, I participated in a forum entitled “Emotional Survival During Difficult Times” at the Stony Run Friends Meeting in Baltimore. I sat with many of the same people who’d traveled to Washington together on the bus. The strategies for survival were helpful. One of the points a Friend made was that people who engaged in activism were happier and less stressed than those who stayed home. Therefore, when another person at Meeting mentioned there would be an airport protest that evening, I decided to change my plans and participate.

The airport protests of Jan. 28-29 were spontaneous and had no central planning committee. It was very different from the two months of planning that preceded the Women’s March. That Sunday, a Facebook event page appeared with links to information about protests being held at dozens of airports around the U.S.  The biggest protests were in New York, Los Angeles and Dulles International outside of Washington D.C.

I headed out to Baltimore-Washington International Airport (BWI) with a friend and her college student son. As we entered the airport, it was very quiet. We decided the protest was likely near the customs exit, so we headed in that direction. We walked along and soon enough were flanked by dozens of people carrying signs with statements like “We Welcome Everyone.” These protesters seemed to be mostly age 40 and younger. Because the presidential order targeted prospective immigrants, the draw to this protest included many people who were either immigrants themselves, or the children or grandchildren of people who came to this country.

It started with the sound. The airport’s high ceiling filled up with many call-and-response chants led by men with powerful voices. I chanted and took photos and shared a hug with a woman wearing a stars-and-stripes hijab, similar to the image on the Shepard Fairey “We are the People” poster we both carried. 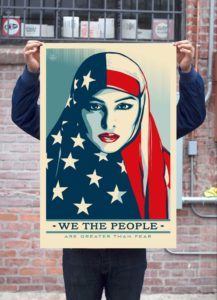 Another difference was the presence of spectators—dozens of US military service members on an upper floor, pushing carts with luggage. The sight of us protesting would be their last image of the United States, as they headed off to the Middle East.

The airport protest was confined to two floors in the international arrivals and departures area. It was easier to move around than at the Women’s March. I wandered and came to chat with a large group of lawyers sitting at a table. They’d come as volunteers to assist families who might have someone arriving from the seven banned countries was being held. No such travelers were coming in during my time at BWI. Still, resounding cheers broke out anytime non-American travelers emerged from customs. I can imagine how surprised and pleased they were by this rousing welcome.

Although there was no formal program of speakers, several lawmakers who came to BWI included former Maryland governor Martin O’Malley, who ran for the Democratic party’s presidential nomination, and Maryland Democratic Congressman Elijah Cummings, who thanked me for being part of the protest.

Another highlight was running into friends from book club, the children’s schools, the Quaker Meeting, and neighborhood. I sensed that I could have sat down and enjoyed a cup of coffee and good talk with almost anyone in the estimated crowd of 2,000.

Our new president might see himself as a populist leader. However, his actions have surprised all of us with the creation of a new people’s movement that is filling airports, city streets, and points still unknown.