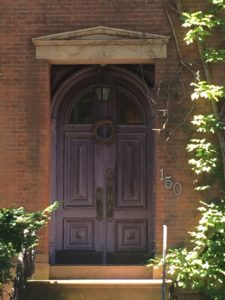 Summer driving trips are on an upswing. Why not? Gas is cheap, and it’s often faster to drive to nearby state than to fly or take the train. Feeling all these things, plus a desire for a short summer road trip, I packed up the Highlander Hybrid and took off for Brooklyn.

The mission was for my husband and me to deliver our teenage son to three-week-long performing arts camp, a significant expense—but one that we sensed would give him a great deal of pleasure, and perhaps help him think about ways to share his stellar guitar performances beyond the confines of his bedroom. And the SUV had enough room to carry an amp and guitar and all the extras needed for a camper—plus room for my  husband and me to bring overnight bags for our own adventure.

We were all going to be happy campers. 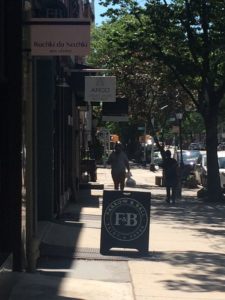 Tony and I hadn’t been in Brooklyn since visiting friends 22 years ago who were renting in the once borderline North Brooklyn neighborhood of Cobble Hill. Our friends had long since departed a neighborhood that became very chic. We stayed in a small hotel at the intersection of Atlantic Avenue and Smith Street, which had turned into a kind of gourmet row full of Danish, French and Asian restaurants. Brooklyn seemed a paradise of good food and sophisticated little shops selling everything from tea to the premium British Farrow and Ball paint. 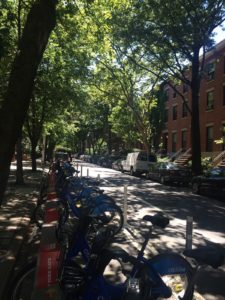 Still, you knew it wasn’t a fake city. The Brooklyn Detention Center faced directly across the street from the Nu Hotel. However, the jail also looked rebuilt. 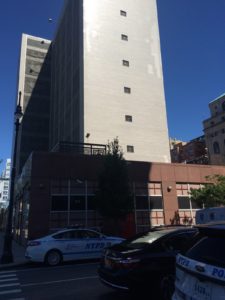 Fortunately, the Middle Eastern grocery shops I remembered from the 1990s were still thriving on Atlantic Avenue. Sahadi’s had a James Beard Award sign in its window when we walked in to buy Aleppo pepper flakes and ras-el-hanout Moroccan spice mix. I got my pita across the way at Damascus Bread and Pastry Shop, which was filled with jovial customers perhaps shopping for Eid. 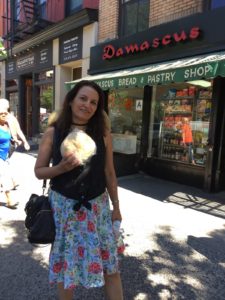 After we’d stashed the food in the hotel, we wandered into the residential area known as Boerum Hill. Did you ever read Betty Smith’s novel A Tree Grows in Brooklyn? Set 100 years ago, that novel showed the poverty and lack of opportunity for the poor and working class in Brooklyn. Today, a lot of tall trees line Brooklyn streets filled with well-kept brownstones. The attached-house architecture reminded me of typical areas in Baltimore, although ours are brick, stucco or wood—and we call them rowhouses. Deja vu continued when we went to dinner at a jazz supper club in Williamsburg, the neighborhood of the book. It was delightful to pass a bar that didn’t have hipsters drinking aperitifs, but older local people who were joyfully slapping dominos. 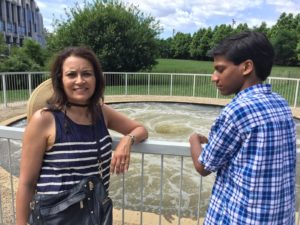 On a Sunday morning, we walked from our hotel to the Brooklyn Promenade, a walk that takes one along the piers of the waterfront known as Brooklyn Bridge Park. Lots of native plants had built a lush landscape, and tucked behind tall shrubs were a series of inviting family playgrounds, some of which had playground sets and others, pools and sprinklers. 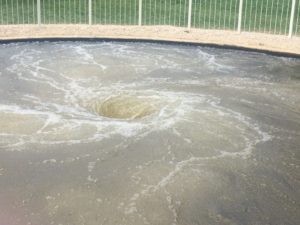 At the Park’s Pier 1, we came upon “Descension,” an art installation by an Indian artist, Ashish Kapoor, who had created a large, round whirlpool filled by the nearby sea water. I found it mesmerizing to stare into the churning water. My thoughts whirled about how Brooklyn once was the kind of poor and working class town that Baltimore still (mostly) is. The two cities were linked by similar architecture, a past history of industry jobs, and attractive, developed urban waterfronts. But why was Brooklyn so much more successful?

The answer was staring at me across the water: Manhattan and its prime jobs. That’s what my own city needed to become more than a bleak setting for crime shows on television.

On our last morning in Brooklyn, Tony and I strolled Smith Street, looking for the teashop we’d recalled seeing during the hubbub of the previous evening’s street festival. The French cafe, Tabac, where I’d had a salad of greens, beets and goat cheese for the previous day’s lunch, was bustling with breakfast diners at its outdoor tables, but the area was largely quiet. We talked about how much we’d enjoyed Brooklyn, which was so surprisingly tranquil… but we couldn’t imagine upgrading to such a place. The cost! 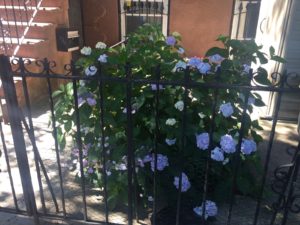 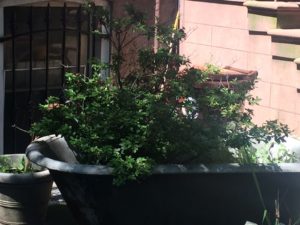 We were startled by a tall man in his twenties walking fast toward us on the largely empty sidewalk. His mouth twisted into a grimace as he drew close. He barked: “You’re running it.” Seeing the confusion on our faces, because he clarified it. “You rich people are running it here.”

The stranger strode off before I could explain that we were actually “bridge and tunnel crowd” who couldn’t afford to buy a Boerum Hill brownstone and paint its door in Farrow & Ball aubergine. I tried to remember the last time someone had verbally accosted me in New York.

Back in the 1980s, I was a young woman who occasionally came into New York to visit college friends and report news for the Baltimore Evening Sun. I remember arriving in Manhattan on a rainy afternoon and trying to hail a cab. One stopped, and its driver, a white man, gave me a second look after I told him to take me to the Upper East Side. He asked, “Do you tend to have trouble catching cabs?”

“When it rains, it’s difficult,” I’d answered uncertainly. What was he getting at?

He gave me a hard look. “I mean, isn’t it hard to get a cab because you looked Hispanic? Who wants to stop? I don’t want to drive to Spanish Harlem.”

The cabbie was trying to put me in my place—just as the guy on Smith Street was doing.

Back to 2017. I was shocked that a stranger would mistakenly infer from the sight of me that I was a wealthy interloper. Yet I couldn’t deny that we’d booked two nights in a hotel intending to enjoy the restaurants, shops and parks of Brooklyn.

However, in his mission to make a tourist couple feel uncomfortable, the angry young man communicated something quite valuable.

There are people living in Brooklyn who don’t have handsome houses with aubergine-painted doors. They are the Brooklyn originals who worry that, in a few years, there might not be any room left.