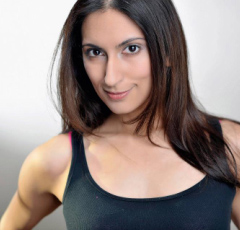 “In the on-camera world, my name and appearance play a huge role, but in voiceover, it’s all about what my instrument can do.”
—ZEHRA FAZAL

In 2013, I released an audio recording of The Typhoon Lover.  The first Rei novel to have its own audio edition, it’s actually the eighth book in the series: the one that opens at Rei’s wild 30th birthday party in Washington DC.  The morning after, she’s recruited by a group of shadowy American government officials to find an ancient piece of pottery looted from Iraq’s National Museum that might be in Japan. The problem is that Rei’s current boyfriend Hugh Glendinning can’t be told what she’s up to… and neither can her ex, Takeo Kayama, who quickly becomes part of the investigation. Throw in a partying Scottish grunge band, a bunch of unhappy Waseda University students, anxious Aunt Norie and some very bad weather, and Rei is in practically drowning in trouble.

Audible.com offered to cover the narrator and production fees if I could find a professional narrator to record this book. In exchange, I’d earn a percentage of all sales rather than a cash advance. I was enthusiastic, but finding an actor who could pronounce Japanese and Glaswegian English seemed an impossible task. Half a year after my search began, Zehra Fazal sent me a beautiful audition tape of the first chapter. We decided to work together, with Zehra recording all the chapters at a professional studio and emailing the files for my review. I was bowled over by how fluently Zehra spoke Japanese and pulled off the various Scottish and Middle Eastern accents. Just as importantly, she gave Rei a smart, charming California girl voice. I asked Zehra about how she came to build such a fascinating career.

Sujata: How would you describe the distinctive accent you used for narrating The Typhoon Lover? To me it sounds smart, a little sarcastic and also like California. How close is this to your everyday voice?

Zehra: Rei’s voice is pretty similar, but pitched slightly higher and more nasal with the snark turned up a notch. I’m from central Indiana, which is noted for its “standard American” quality, and lived on the East coast for about ten years and had been in L.A. for about a year when I recorded The Typhoon Lover, so I guess all those locations “flavor” my vocal quality!

Sujata: Where were you born and in what countries did you grow up? Has this impacted your ability to pull off so many accents?

Zehra: I was born outside of Chicago and grew up in West Lafayette, Indiana. My parents are Pakistani immigrants, and we’d take annual trips to Pakistan and England to see family—that was my international exposure as a kid. I’m not fluent in Hindi/Urdu, but my parents would speak it constantly around the house, so that helped to develop my ear for languages other than English—which I was always very good at—I started reading at a young age and loved writing, performing and using big words. 🙂

I’m also a musician—I’ve been singing and playing instruments from an early age, and I think learning the musicality of accents and foreign languages is something that comes easily to me because of that training.

Sujata: How did you become interested in Japan? Are you a fluent Japanese speaker? To me, your accent is flawless.

Zehra: Wow, thank you! Sonna koto nai desu ga… [But that’s not true] Believe it or not, Pokemon is what introduced me to Japanese language and culture. Through Pokemon, I became interested in anime enough to study Japanese at Wellesley College. I then discovered Japanese theatre, specifically the all-female musical theatre the Takarazuka Revue, and ended up translating and staging one of their musicals as my senior honors thesis. I interned at Takarazuka for a summer during college–it was one of the best experiences of my life and an amazing instance of cultural exchange. I studied Japanese formally for about 4 years in school, including a rigorous semester at Stanford’s Kyoto Japan Center, and kept it up over the years through writing and composing music in Japanese, speaking with my Japanese friends, and continually studying Japanese theatre! I was in Kyoto two years ago doing a Kyogen (traditional Japanese comedy) training and performance program. Japanese is a beautiful and bewitching language and I intend to keep studying it for as long as I live. It’s like a marriage. 😉

Sujata: About how many audiobooks have you narrated? Is it something you want to continue?

Zehra: I think I’m up to 13 since I started a year ago! It’s definitely something I want to keep doing, and keep working with directors, publishers and authors. I love working on books like The Typhoon Lover that are so well written and have several complex characters.

Zehra: I definitely read every book once through to understand the overall arc, and each character’s arc. I then start the recording process. One finished hour of audio has approximately 4-5 hours of work put into it. 2 hours to record, 1.5-2 hours to edit, and 1 hour to quality check (listen through and make sure there aren’t any funny mic noises, thumps, breaths etc.). So a 400-page novel would take approximately 50-60 hours to complete.

Sujata: Tell me about your one-woman comedy show, and if you are doing any live theatre now.

Zehra: I wrote a musical-comedy show a few years ago called “Headscarf and the Angry Bitch.” The title is a parody of the famous show “Hedwig and the Angry Inch,” as most of the songs in the show are parodies of popular tunes. It explores, in a comical way, the experience of growing up as a Muslim in America. I toured it around to different festivals, theatres and colleges around the world and had a blast. My goal was to dispel stereotypes and post-9/11 fear and wariness of Muslims with humor. It was pretty awesome to do the show in my home city of Indianapolis to sold-out crowds—the fact that over 200 Hoosiers a night would gather to see a musical about a Muslim woman is pretty amazing to me.

Sujata: Has your name typecast you for certain roles or not? How do you deal with that?

Zehra: It’s not really an issue in the world of audiobooks and voiceover, which is why I love performing with just my voice! If anything, my name gives me the opportunity to market myself in a “niche” way I wouldn’t necessarily be able to do otherwise.  In the on-camera world, my name and appearance definitely play a huge role, but in voiceover, it’s all about what my instrument can do. It’s very liberating as an actor.

Sujata: In The Typhoon Lover, were there any especially challenging characters to voice?

Zehra: Creating the voices for all the men was a challenge in that I had to create deeper, masculine tones and phrasing without coming off as a caricature of a man. In audiobooks, cartoony voices are usually avoided in favor of “shading” the voice—giving just enough of a hint of gender, age, etc. to differentiate the characters.

In regard to the Japanese accents—again, I hoped to not come off as a caricature. I based many of the voices on Japanese people I’ve known and observed. Takeo was an interesting challenge because he’d spent a large amount of time in the US, so I tried to make his accent less pronounced as compared to the older Japanese characters. Thanks very much to you, Sujata, for this particular direction on how to take Takeo in particular! The women were a little easier—Norie was so much fun to voice. I modeled her after a few wonderful Japanese “aunty” friends of mine—very wise, very concerned and a little young at heart.

Sujata: Does anything stand out about your experience narrating this book (like was it stressful to have to do not just one Japanese character’s accent, but more than a dozen!)?

Zehra: In The Typhoon Lover, Rei’s love life is, shall we say…complicated? It was a fun challenge to get in Rei’s head and figure out her conflicting emotions over all of these men.  It was so much fun to do the love scenes! Wait, that sounds strange! What I mean is, one of the most fun parts of reading a book as a regular reader is to get lost in the story and invested in the characters and their unfolding romance. And so what happens as an audiobook narrator is that, sometimes, I end up “falling” for my leading men. “Wow, that guy has a sexy voice…” I would sometimes end up thinking about Takeo, before remembering that those lines just came out of my mouth! (laugh)

Sujata: What’s your next project?

Zehra: I’m working on a new musical comedy act that will premiere this June in Hollywood. You can also hear me in the friendly skies on the airline radio show TalkBusiness 360 and on various commercials around the country. I’m in the process of releasing a couple animated short films that I wrote and voiced over the next couple of months. The best way folks can follow my work is www.zehrafazal.com, or on Twitter @ZehraFazal. Thanks so much, and keep reading/listening to books!