I had unbelievable food in Indian homes, hotels and restaurants. I gorged on okra fried and simmered in so many different ways. This under-appreciated vegetable that is a knock-out in India, where it’s called by the very pretty English name of “ladyfingers.” Too many variations of the milky rasmalai dessert were sampled. And there are no words to describe the superlative texture and flavor of South India’s jumbo prawns and shrimp, whether grilled or swimming in coconut curry. The best shellfish I’ve ever eaten.

Some dishes will never taste as good outside of their home regions. But I comfort myself back here in the United States with recipes I wrote down, and my little packages of spices and staples like basmati rice that can be transformed into so many varied dishes. 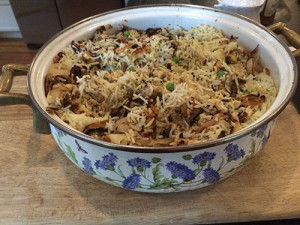 Biryani is a rich, North Indian dish of rice, vegetables, spices and often pieces of marinated meat or fish. I believe it came to India via the Moghuls, although the Parsis from Iran could also lay claim to the honor (much more about Parsi food in the next newsletter). My inauthentic, vegetarian recipe honors this very old heritage and some fusion ideas. You’ll have the option of hunting down a few special ingredients that can be found in Middle Eastern stores and upscale grocers—but these additions are not essential. 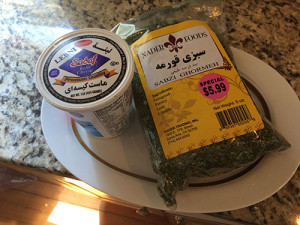 When I go to a potluck, I often bring a rice dish like this biryani. There are many spices in this dish, but the cooking is easy and the resulting rich flavors are worth the effort.