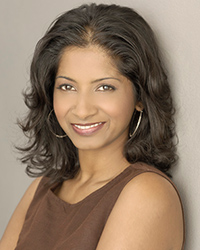 “Some people enjoy picking up new instruments; I get great joy out of learning bits and pieces of a new language.”
—SNEHA MATHAN

On the Bookdragon blog run by the Smithsonian Asia division, the reviewer recommended the Dreamscape audiobook version of The Sleeping Dictionary over the paperback book. The obvious reason is that its talented narrator, Sneha Mathan, makes many pages pass quickly. Sneha’s voice magically transforms for different ages, genders and nationalities without ever falling into the singsong stereotype you hear on shows like The Simpsons. After listening to all 16 hours in her family room, one friend phoned me to say: “About that Mr. Simon Lewes: I have a crush on him!” For a female actor to narrate hundreds of dialogue lines in the voice of an Englishman—and have him come off so intriguingly—is quite a feat. I talked to Sneha about her work recently.

Sujata: What would you call the distinctive accent you use for narrating The Sleeping Dictionary? It’s perfect! When I was researching in Calcutta, I met an Indian woman who’d studied at Oxford sixty years ago and spoke in a gorgeous accent unlike anyone else’s I’d heard. I never mentioned her, but you replicated that sound for Kamala’s narration. Is it your everyday voice, and if so, what life experiences contributed to it?

Sneha: My everyday accent is a wacky amalgamation. (The accent I use for Kamala is stronger and more distinctly British than my own, but there are some similarities.) My accent has a strong base in British Received Pronunciation (RP) but I’ve lived in the US for a couple of decades now, so my cadence is not very British sounding at all—more neutral, a sort of orphan dialect perhaps? I grew up mostly in India and attended schools that were heavily influenced by the British school system. I had teachers and family members whose English was very proper, and much of the foreign media we were exposed to was British. Language was, and is, important to me, and I’ve always been strangely drawn to pronunciation in particular. No matter the language I am speaking or learning, I have this drive to make it sound as authentic as I can manage. In the India I was growing up in, a mere 30 years post independence, the most ‘authentic’ English was British RP. So that was my model.

Sujata: Where did you grow up, and what languages were spoken around you?

Sneha: I spent much of my childhood in India with a short spell in the Seychelles and an even shorter spell in Saudi Arabia.  You’ve really hit the nail on the head, Sujata—language was a significant marker in my life.  At various points in my childhood I spoke, had to study or was surrounded by:  Malayalam, Hindi, Kanada, French, Creole, Sanskrit and Arabic.  Of those, I can only claim to speak Malayalam and Hindi and a bit of French to get by, perhaps.  But the music of those languages, the way they inflected English, found a home in me—rather useful for acting, as it happens!

Sujata: Were you a strong language student in school? I have a hunch that people who can speak with many accents have a knack for languages.

Sneha: Some people enjoy picking up new instruments; I get great joy out of learning bits and pieces of a new language.  Not so much in a school setting, because I find that a very artificial environment for something as dynamic as language, but in its natural, immersive setting, there’s nothing like it!  The thought of going to a country where I don’t know the language, and having to figure out how to communicate, thrills me actually.

Sujata: What kind of work did you do before you became an audiobook narrator? Or was it a career you thought about and went for from the very beginning?

Sneha: I was training toward becoming a Speech Pathologist, but voice work kept beckoning to me so I decided to heed that voice.  It’s been a very rewarding career and one that is never lacking in variety.

Sujata: About how many audiobooks have you narrated?

Sneha: I have narrated about 18 commercial audiobooks and 25 titles for the Washington Talking Book & Braille Library.

Sujata: You have narrated a whole lot of Indian books, but have the talent to do many accents. Have you done audiobooks outside of this category?  If so, what are some of them?

Sneha: You are very kind!  I’ve recorded books set in Iran, in Afghanistan, Israel/Palestine.  I’ve also recorded a couple of delightful children’s books set in London and other books set in ancient Rome & Egypt, even one set in Wales.

Sujata: What was an intriguing/challenging kind of accent and character you had to create?

Sneha: The Sleeping Dictionary has actually been the most sweeping title I’ve done so far in terms of the sheer number of different nationalities and dialects it depicted:  from Australian and Scottish to Chinese-Indian, Anglo-Indian and British—it was a great challenge and I had to dig deep for some of those!

Sujata: Do you do any theatre or film acting or radio/TV commercials? If so, what have some of them been?

Sneha: I do a few audiobooks a year but the bulk of my career is corporate voice work, most of which is non-broadcast. The greater Seattle area is home to—oh, one or two tech companies—and I’ve been fortunate to do projects for them.  I especially value the work I’ve done for various NGOs and philanthropic organizations in our region.  ‘Voice of God’ work is always fun—that’s the voice that does the dramatic introductions and announcements for large events.  I’ve done some video game trailers, phone-systems and narration for independent films.  And once in a while I do print and on-camera work.  But I much, much prefer being heard rather than seen.

Sneha: Oh my yes, a lot of hours go into a finished audiobook.  Let’s take The Sleeping Dictionary as an example.  It clocked in at ~16 finished hours.  That translates to 32-40 hours of actual studio time, recording.  But before any recording can happen, a considerable amount of preparatory research must happen. How much time I spend on prep work depends on how much lead time I get from the publisher.  It’s usually pretty tight: about a week before recording begins.  In that week, I read the book and mark up the manuscript with diacritics and phonetic notation to help me with parsing and delivery.  I sometimes draw a facial sketch, so I know who’s going to speak next and in what mood.  I also keep running lists of characters, their age(s), vocal/physical peculiarities, personality traits etc., and a list of foreign terms, jargon and obscure words & phrases with their corresponding phonetic notations.  These documents get pinned up around me in the recording booth for quick reference.  I sometimes record mp3s of character voices I’ve come up with and have them on a phone or iPad to refer to.  A conservative estimate of the hours it takes to prepare and record a 16-hour book, for me at least, would be roughly 70 hours—to say nothing of the post-production work that happens with engineering and mastering.

Sneha: It was an honor to be entrusted with voicing The Sleeping Dictionary, Sujata, to bring your passion and artistry off the page as faithfully as I could.

The historical and geo-political setting of The Sleeping Dictionary was especially engaging to me as a narrator.  I got to deliver lines from famous speeches (and prepare for them by listening to crackling audio of the actual speeches online.) The reinventions of Kamala and the large cast of international characters kept me on my toes and were an enjoyable challenge.  And yes, most definitely, a book of this size requires vocal stamina and that’s when having a terrific director really helps.  Having the amazing Lyssa Browne of Cedar House Audio on the journey with me was invaluable in keeping the recording fresh, consistent and as close to the author’s intent as possible.

Thank you so much for your questions and for your interest in the recording process, Sujata.  My very best to you!