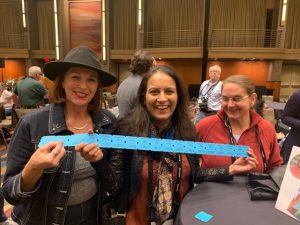 I went to Dallas last weekend for Bouchercon, a 50-years-old-and-counting annual mystery convention. The weather was cold, yet the Texans were warm. So were the folks I chatted with among the flood of 1800 mystery lovers who arrived from all points. This year’s theme was suited to conventional thinking about Dallas: Diamonds, Denim and Death!

Every day was filled with book talk. This was done on panels, in the book room, the bar, the hallways. I met people from as far as Israel and India, and as close as Indianapolis. I met so many new friends that I hope to see again.

Even though Bouchercon is ostensibly about attending panels of crime novelists and publishing  professionals, there are many side parties and special activities. Soho Press, my publisher, specializes in mysteries by authors from around the world, and they threw a special reception for author Peter Lovesey, who was celebrating the eighteenth adventure of his brilliant police detective, Superintendent Peter Diamond. I tore almost one hundred raffle tickets for people wanting the Diamond book bonanza. This was another slick way to make friends.

I feel so much at home with a publisher like Soho, who is enthusiastically committed to publishing great fiction with characters who are diverse in national backgrounds—and not sprinkled in for color, but because they are compelling people and their stories are unforgettable. At the Soho International Guest of Honor party, Peter Lovesey announced a new Soho contest for first-time authors with a paid advance and publication. He got his start with a literary contest in England, and that’s similar to how I broke into print (the Malice Domestic Unpublished Writers Grant Contest).

When I began going to Bouchercon in 1996, the majority attendance was white men. Gender dominated the atmosphere in the bar and in the pale rooms. For the most part, Bouchercon no longer has that feeling of an old boy network. The con feels like a place for many people to express what it is they bring to mystery or love about it. I hear about mystery book groups, field research in New Zealand, and secret hikes into off-limit areas. Also crafts, quilts, and cocktail recipes.

In addition to panels where we can learn the secrets behind beloved books, the convention is also a haven for awards ceremonies. The convention bestows a fan-voted prize called the Anthony, which is named after the inspiration of the convention, the late New York Times book critic Anthony Boucher, said to be the first journalist who treated mystery fiction as serious literary works. Other mystery-centric organizations like Mystery Readers International give out the Macavity awards for general mystery fiction, and the Private Eye Writers of America awards the Shamus awards for professional investigator novels and stories. The Barry and the Dillinger are also coveted awards at Bouchercon. But that’s not enough for Bouchercon. Its organizers also shower honors on booksellers, fans, and other special people who have built the power of mystery fiction. The overall theme is love and thanks for keeping our literary world booming.

If you go to enough conventions, you may no longer wear a size six little black dress, but there are some sizable advantages. Being an old-timer means you can enjoy seeing friends and newcomers light up as they receive their first requests for books to be signed, and maybe even awards for them. This year brought a special thrill when my friend Shawn (S.A. Cosby), whose first novel comes out next year with Forge, won the Anthony for best short story. He had moved me to tears a few nights earlier reading this prize winning story, The Grass Beneath My Feet, aloud in the hotel bar.

Yes. Only with mystery lovers, is there read-aloud story time in bars.

On Halloween night itself, I was humbled to win the Macavity Award for The Widows of Malabar Hill. It turned out to be a beautiful crystal keepsake that will be take pride of place alongside a fabric Macavity cat award I won many years ago for The Flower Master. The nominees in this category were so excellent, I think any one of us could have won. So I am especially grateful, following the amazing awards this book has already gathered. 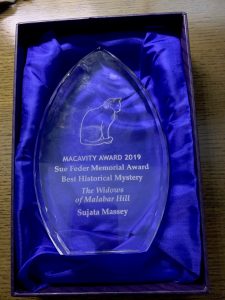 I was also nominated for a Shamus award given by the Private Eye Writers of America. I was very surprised that Perveen Mistry was seen as fitting into this category—she’s a legal investigator, not a gumshoe. I hardly minded losing to Kristen Lepionka, who wrote a great modern PI novel featuring a woman, What You Want To See.

At the Shamus awards dinner, some words were casually said that led to many follow-up dialogs on Facebook and Twitter about how we can welcome people we don’t know well into our various tight-knit mystery worlds. Some of the conversations were quite heated, while others were healing. Anyway, it wasn’t until a few days after I got home that I could put away this other baggage, too.

When the new books go on the shelf, the old suitcase returns to the attic, and the wrinkled receipts go to the tax box, I no longer have visions of diamonds, denim and death.