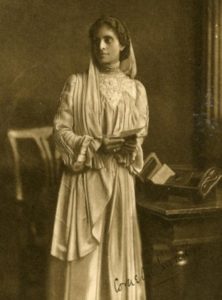 The story of Perveen Mistry, a Parsi woman who is the only female lawyer in 1920s Bombay, was partially inspired by a real historical figure, Cornelia Sorabji.

Cornelia Sorabji was born in 1866 in Nasik, India. Her career path was heavily influenced by her parents, who advocated for her and her seven siblings to become leaders in education and social welfare. Her mother, Franscina Santya Ford, was born Hindu and after being orphaned was adopted and raised by a British military couple. Franscina established several schools for Parsi, Hindu and Muslim chil­dren in Pune. Her children were raised with British customs and grew up surrounded by diverse cultures. Cornelia’s mother was often consulted by local women about social problems, an experience that would later influence Cornelia’s career.

Cornelia’s father, Sorabji Kharsedji, was a Parsi (Indian-born Zoroastrian) but con­verted to Christianity in his teens and served as a missionary, educator, and translator for the Bishop of Bombay. Cornelia’s family dressed in the Parsi fashion, spoke Guja­rati, and continued to identify culturally as Parsis, although their faith was Christian. While the Sorabjis encouraged all of their daughters to attend Bombay University, female applications were rejected until Cornelia, the fifth daughter, finally broke through the barrier to entry. She read literature and completed a five-year Latin course in one year. She was the top-ranked student in her class at Deccan College in Pune; but because she was female, she wasn’t awarded the Oxford scholarship that automati­cally went with that achievement. Ultimately, a group of prominent Englishwomen raised funds to support her education at Oxford, and Cornelia enrolled at Somerville College in 1889.

Initially attracted to medicine, Cornelia was steered by her mentors at Oxford toward the study of law. In 1892, Cornelia became the fi rst woman to pass the Bachelor of Civil Laws examination, although Oxford would not grant her a degree until three decades later.

After returning from Oxford, Cornelia began a ten-year search for a legal post in In­dia. As a solicitor, she prepared cases for women clients, especially in the princely state of Kathiawar, where she was not barred from presenting cases in court. In 1897 she joined her younger brother Dick in a brother-sister law practice in Allahabad.

Cornelia wrote articles for newspapers and magazines in her campaign to persuade India’s government that women living in seclusion—purdahnashins—were suffering from lack of access to legal representation. She was elated when the Indian Civil Ser­vice fi nally appointed her as their legal adviser for purdahnashins. During her twenty years as Lady Assistant to the Court of Wards, she was based in Calcutta but traveled throughout rural Bengal province, visiting hundreds of women and orphans in jeop­ardy. For her service, she was awarded the Kaiser-i-Hind gold medal in 1909. Cornelia wrote several books about purdahnashins and established a plan to train secluded women as nurses in Calcutta.

After 1920, Oxford began awarding degrees to women, and the London Bar agreed to let women with law degrees plead cases in court. In 1923, Cornelia traveled to England to collect her degrees to begin the second phase of her work life. She then returned to Calcutta, where she enrolled as a barrister in the Calcutta High Court. She became embroiled in a controversy by agreeing with the American writer Kather­ine Mayo’s defense of British rule of India. Cornelia’s rejection of Mahatma Gandhi’s freedom movement created a permanent loss of her reputation among Indians.

Cornelia gave up legal practice to focus on social work after 1929. She continued writ­ing and moved back to England for good in 1931. She never married, although dur­ing her working years in India, she had two secret romantic relationships with British men that caused her much heartache.

Cornelia continued her life of writing and social work, and during World War II, she was a war volunteer in London. Her health declined after the war and she died in 1954 at the age of 88.